I wrote this post last summer, but, at the time, couldn’t decide whether or not to post it.  I just found it, and thought you might enjoy a peak into my life as a mom. 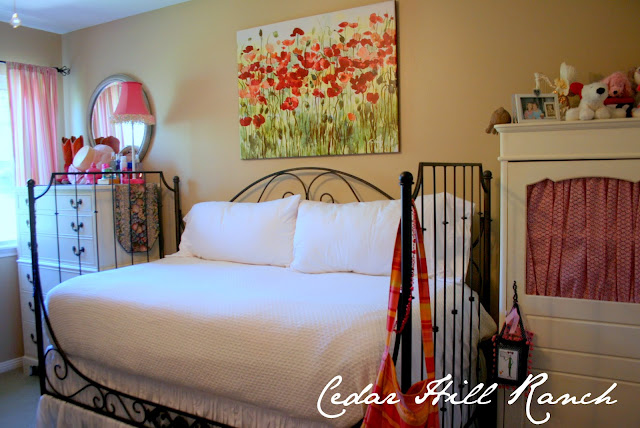 This is what my daughter’s room looked like for a brief moment in time.  This summer she was gone for 4 weeks to various camps and mission trips.  After she left for her first trip,  I came up to her room to put some clean clothes away, only to find that her room had been ransacked.

I thought of calling the police, but then realized that only HER room had been affected and the windows remained tightly locked.  That meant that it was an inside job.  Oh yes, her room was a victim of TEENAGER MESS SYNDROME.

I did some quick calculations.  She was going to be gone for three weeks in a row. So if I spent the hours required to get it back together, I could enjoy the neatness for 21 uninterrupted days.  I decided to accept the challenge.  While I was there, I did some minor rearranging.  I guess I should have taken a “before” photo, but instead I’ll just leave you with a picture word.  Today’s word is TORNADO.

Here’s the picture of what her bedroom looks like in its typical pinkness. 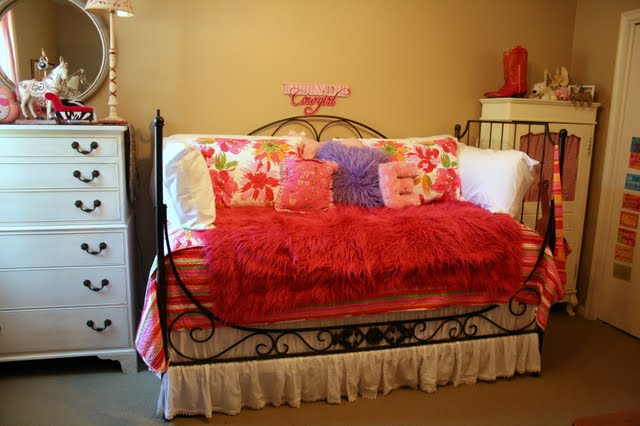 It’s a bit much, right?   I removed carefully stored many of the accessories she had in her room, only leaving the ones I knew were her favorites.  Why is this a secret redo? Because I knew there was a possibility that she would “freak” (her words not mine) when she saw it.  That’s why it was done while my daughter was gone under the proverbial cover of darkness. 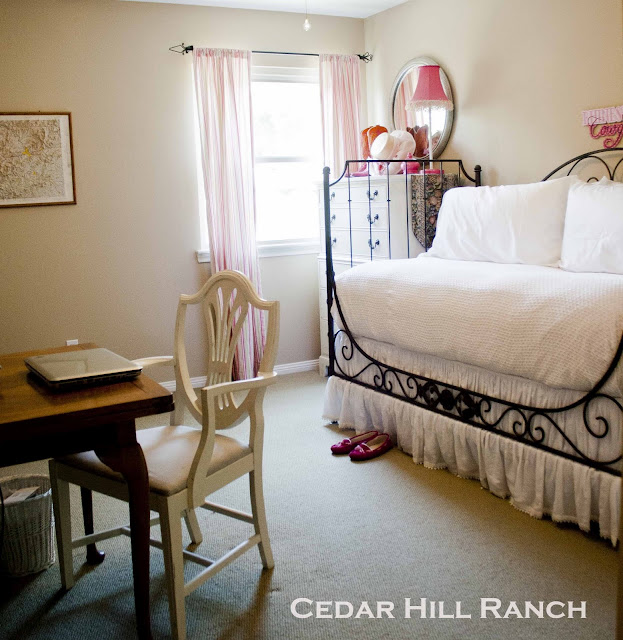 I left out her cute pink L.L. Bean mocs.  I have the same ones in green. 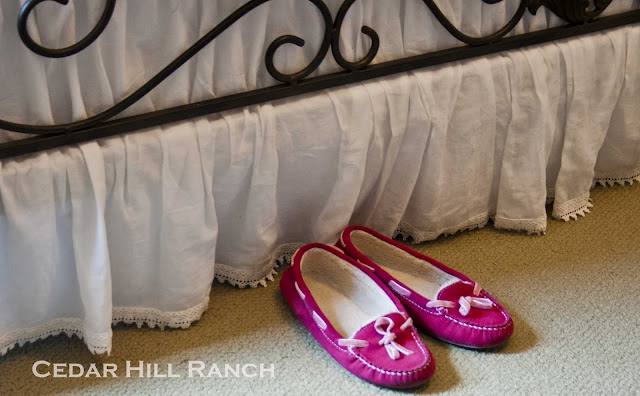 I sometimes wear them (mine not hers) when I am driving although technically speaking, they are house shoes. She used to shriek in disgust when she saw me wearing them outside of the house, reminding me that they were house shoes.  “That’s gross!”, she would exclaim in disgust to any stranger standing nearby.  (Now that she’s driving, I noticed that sometimes she wears her “house shoes” out, hmmmm.) 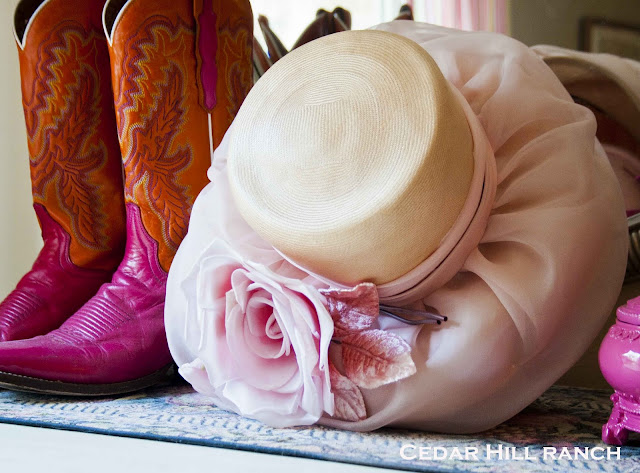 I did add her grandma’s hat to her room, since it happens to be pink. 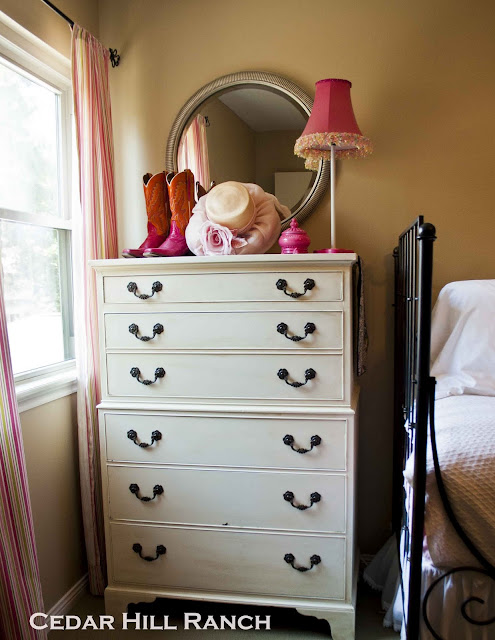 The chest of drawers once belonged to her granddad, and I don’t think he would mind that we painted it white before we added it to her room. 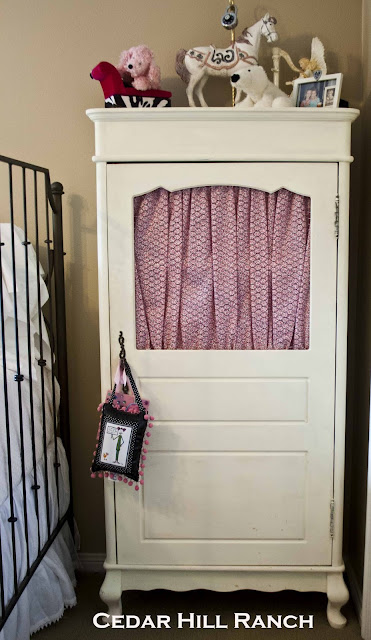 And she also has this little armoire in here that houses her books and assorted things.  I tried to replace it with a nicer piece, but she likes the pink fabric too much to part with it.

The little pillow says, “Put your big big panties on and deal with it.” 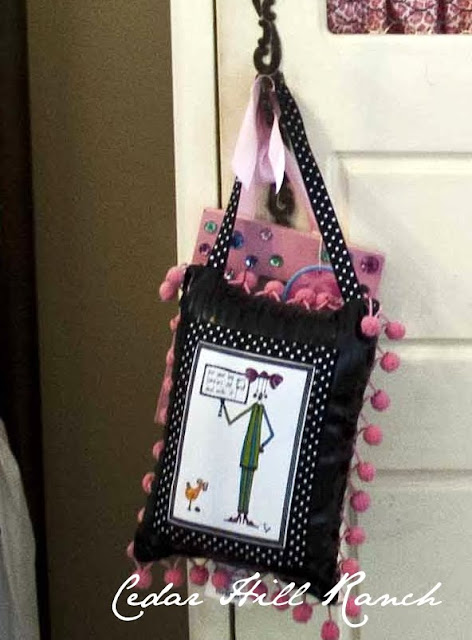 So when I daughter finally came home, she first noticed that I painted the breakfast room and the kitchen, and then came upstairs to her room.  I knew better than to ask if she liked the new look.  Soon enough she came calmly out of her room, to tell me that me preferred her old bed spread to this new one.

(Perhaps the mission trip did impact her.  She wasn’t screaming that I had ruined her life.)  That’s when I told her that this “new bedspread” wasn’t new and wasn’t a bedspread.  I said, “It’s called a B-L-A-N-K-E-T.”  I  assured her that all of her old bedding was simply in the linen closet and that any time she wanted it back on her bed, she need only retrieve it from the closet.  I also happened to mention that all I did was pick her bedding up off the floor and put it away so that it wouldn’t be in her way while it wasn’t on the bed.  Now she would have room to dance.  (Insert major eye roll here.) She shrugged her shoulders and asked what was for dinner. So that was that.  I guess I need a t-shirt that says ‘I survived cleaning my daughter’s room.’