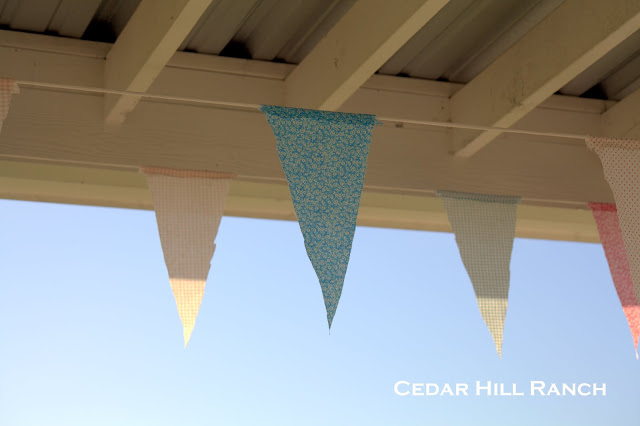 Before I tell you about the pendants, I wanted to let you know that we had our big party last Saturday.  There’s so much to show you that I am breaking this down into several posts. This post focuses on the pendants.

All of the party prep was fun, the party was fun, but the morning of the party, things fell apart somewhat.  I had a little mishap with a ladder when I was putting up these pendants.  I thought I had the ladder snapped in place, and I moved it several times adjusting the pendants so they weren’t all bunched together.  As you might guess my eyes were on the pendants and not on the ladder.

At some point I realized that the ladder was falling and I was going down with it. Apparently I screamed but I don’t remember it.  I do remember landing with a thud, and feeling a lot of pain in my ankle.    My daughter came out to see if I was okay.  I was fairly certain my foot wasn’t broken but it hurt like crazy.  I sat with it elevated and applied ice for 20 minutes, took an ibuprofen, and that was the extent of my treatment for the day.  I did pretty well during the party, but by the end of the day, my foot felt like a big fat watermelon.  It had swollen a good bit and had turned purple and in several places.

I don’t normally mind clean up after a party, but this was not fun.  I had spent three days setting everything up, and it was spread out over a large area, so there were a lot of chairs and tables to be put back in their places, lots of tablecloths, dishes, glasses, and silverware to wash.  Obviously, with my injuries, I couldn’t move very fast, and then we had an added complication that my daughter had to be back in the city on Sunday by 2 pm for a mission trip training session.  She’s going on a mission trip with our church in June and we’re very thrilled she decided to do that, but it did make matters much more difficult.  She can’t miss more than one training session, or they don’t allow her to go on the trip, so it was critical that she make it back in time.  It usually takes us half a day to button up the ranch, but now we had mounds of party supplies, dirty dishes, and trash to deal with, and we had to leave a good 5 hours early.  We made it home (albeit a bit late) and by then, my foot had swelled some more.  My ankle is much better, but I’m still recuperating.

So now, back up to the pendants.  The first thing I did to make these, was to select and purchase fabrics at Walmart with small simple prints that went well together.   I bought these at Walmart since I didn’t want to spend a lot of money on this project. 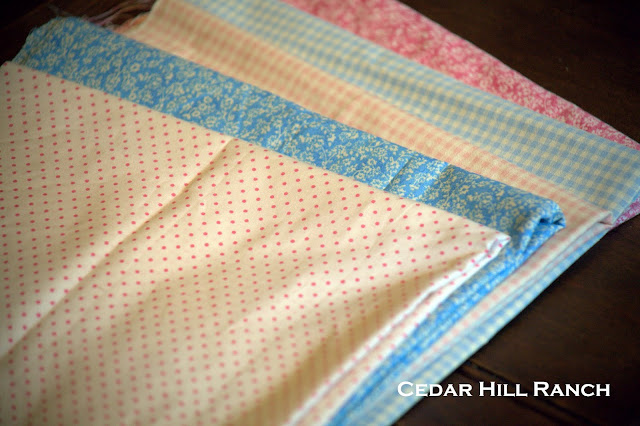 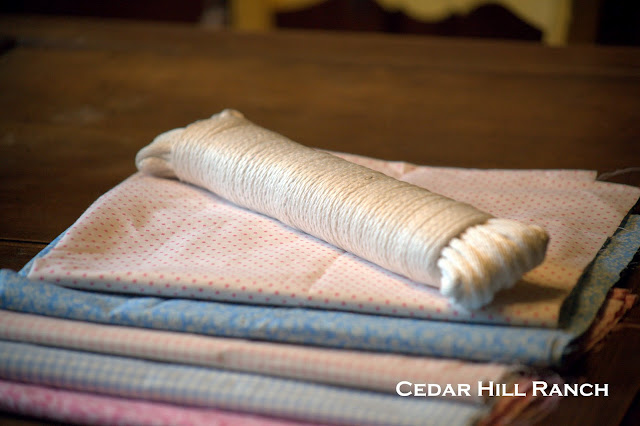 I made a template for the pendants using carboard from a box I had in my garage.  These pendants measure 11 inches long and 6 inches across at the top.  I tried making some smaller, but they looked too small on our 50 foot long porch.  It you were indoors, I think a smaller size would be fine, but obviously they need to be sized appropriately for the area. I could have easily gone larger, but didn’t have enough fabric. 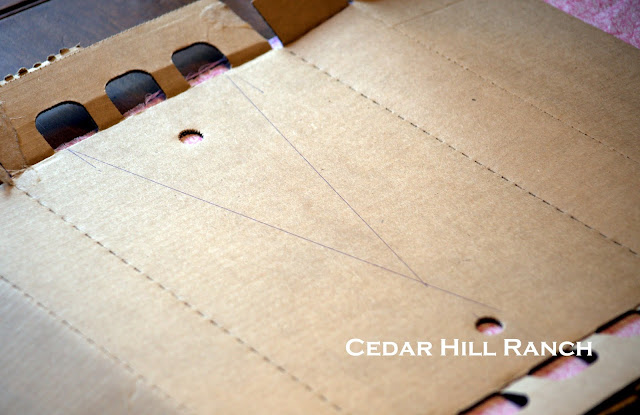 I drew out the shape of the pendants on my cardboard and cut it along the lines I had drawn. 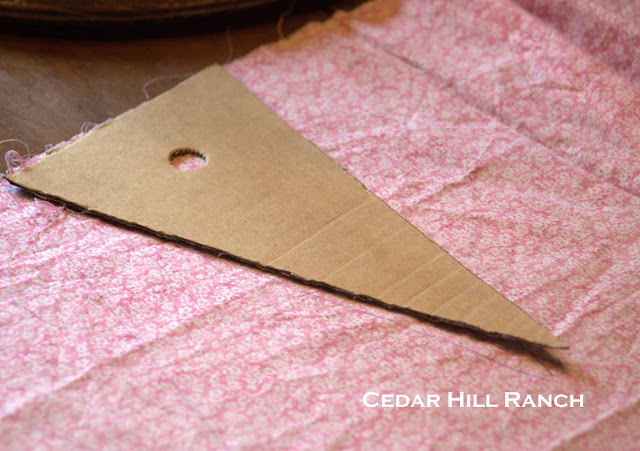 Then I placed my template on the fabric, and traced around it.  After I had marked up my fabric, I cut as many pieces as I could. 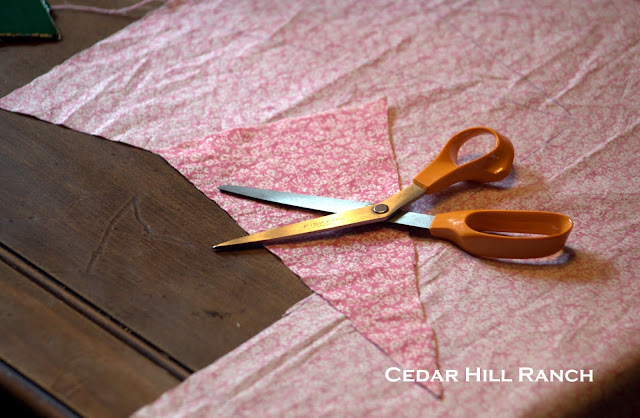 After they were cut, I used fabric glue to fold down the top edge.  I didn’t do any sewing.  So when I designed the template, I added about 1/2 inch to the top to allow for the fold over at the top.  I moved the pendants back and forth a bit while the glue dried to be sure the flags didn’t get glued in place.  I wanted to be able to move them later if I wanted to. 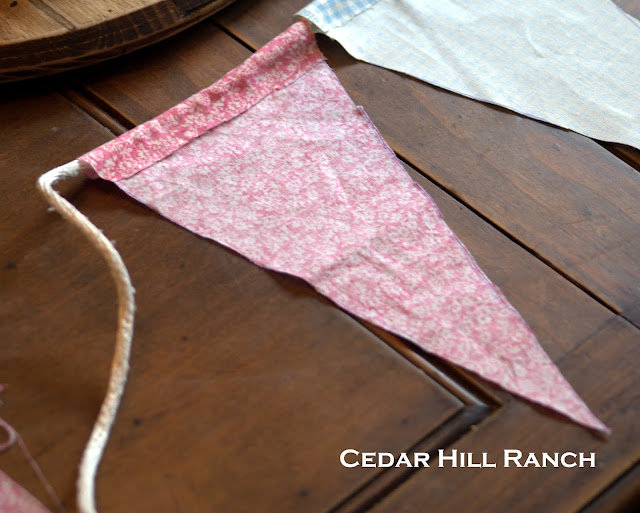 I watched a DVD while I did the gluing so it went by fast. 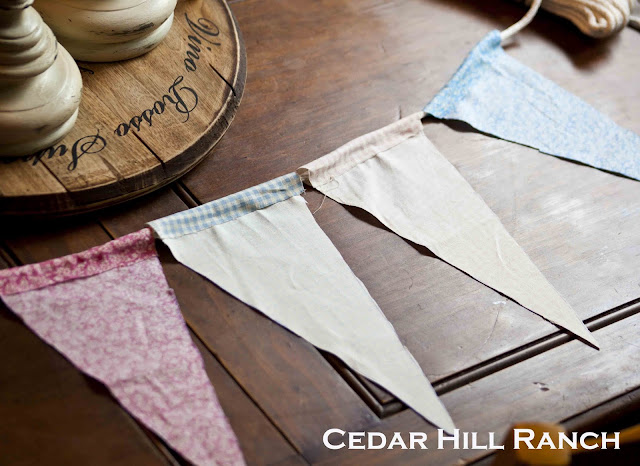 I had enough rope and pendants to run two lengths down our porch.  The clothesline came in a 100 ft length. 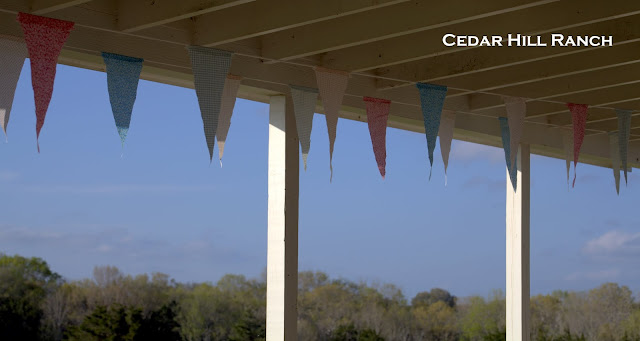 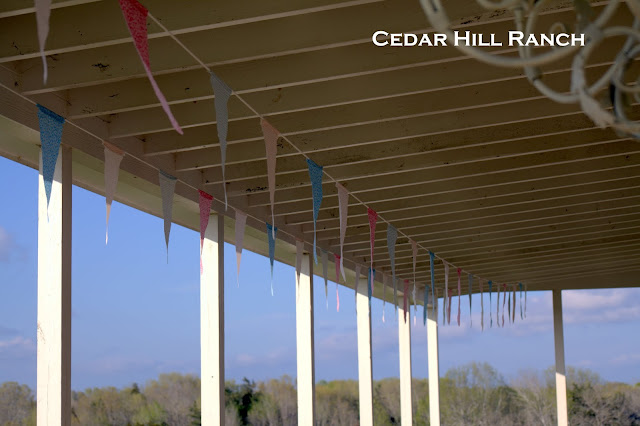 You can see sunlight hitting the pendants as the sun dips slowly on the horizon. 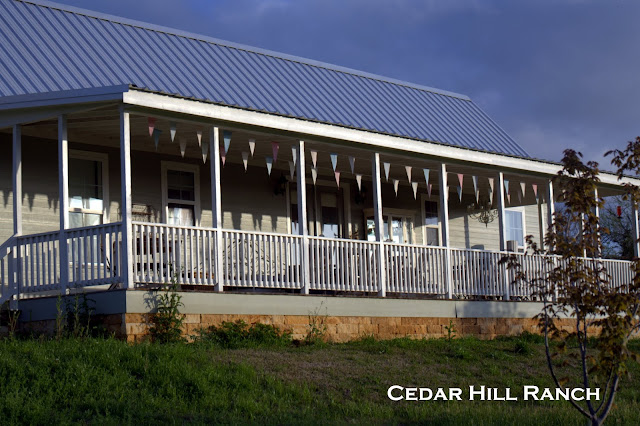 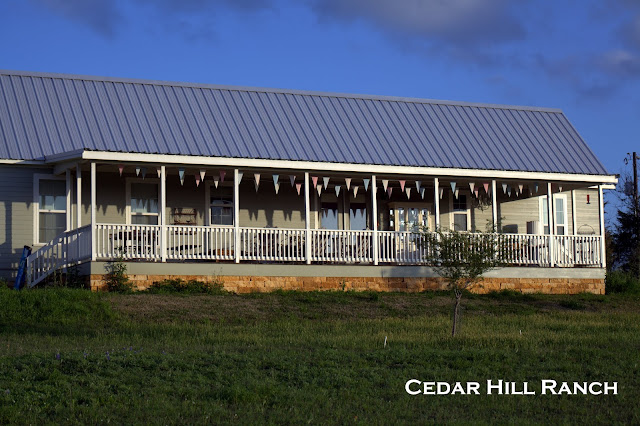 I think it added a nice touch to our party. 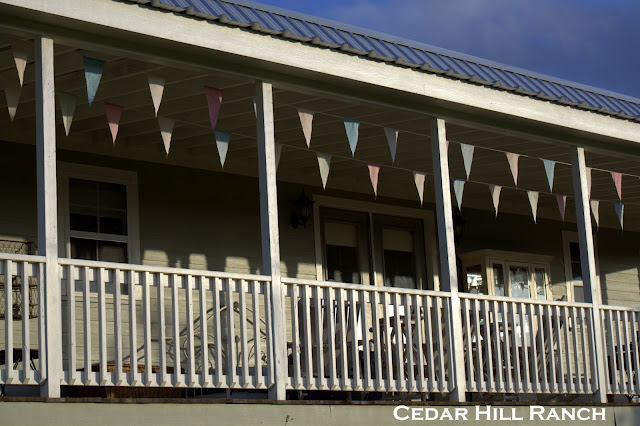 Did you miss any of my other party posts?  There right here.
Chinese Lanterns on the Creekside Deck
Back Porch Bunting
Back Porch Tables
Mason Jar Lights
Buffet Line – plates, flatware, napkins and kids plates

Water, Sodas, and Dessert under the tree