So when I say these trophies were hard won, I mean it.

That’s right I actually won these!

Another is a award from “Nottingham Schools, Badminton Association, Boys Doubles”,

What… you don’t think I really won these?  Are you doubting me?  Why MUST you be so suspicious?

Must I produce the receipt from the auction where I WON them? 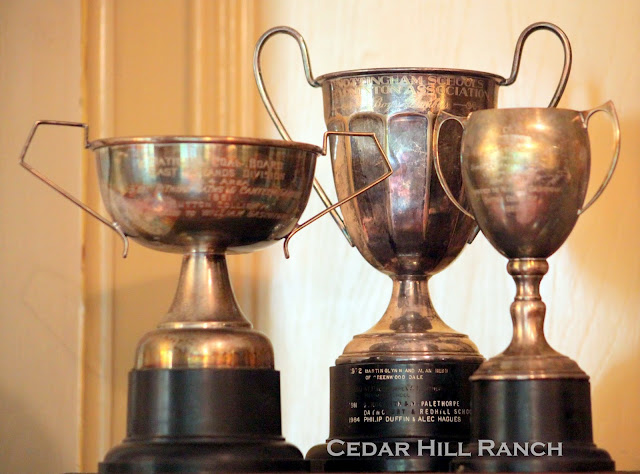 I was sitting next to a sweet lady who also wanted some of these trophies.  There were quite a few.  We agreed that I would bid on them, and then we would split them. We agreed ahead of time, that we would not go over a certain amount.  I bid, but was outbid by someone else.  The winner selected several trophies, and then the auctioneer offered the remaining trophies at the price I had bid to the back up bidder, who just happend to be me!  I went up and grabbed all that was left, and we split them.  I took 3, and she took 3.

I also snagged this great display box.  Does it look a bit odd to you?  It’s widest at the top, and narrow at the bottom. I didn’t notice it before the auction began, but I could tell someone was going to get it for about $40, and wondered why it shouldn’t be me. 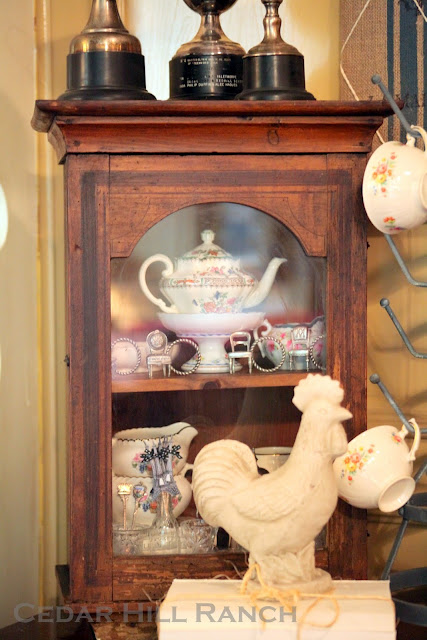 After I got home with it, it hit me.  It’s the top of a grandfather clock.  Well, I mean it used to be… the top of an grandfather clock.  Now it’s a display case.  Someone added that shelf inside the cabinet I am guessing after clock broke or after the bottom was eaten by termites.  I have lots of theories as to why it’s no longer a clock case.  I love that someone before me re-purposed it.  I would say it was a blogger, but I’m guessing it was converted to a cabinet long before there was such a thing as a blog.