As an update to my “Tale of Two Dishes”, I did find out a little more about Franciscan dishes.  They were originally produced in Glendale, California by Gladding, McBean & Co. in the year 1934.   The company produced casual dinnerware in the style of Mexican folk pottery. 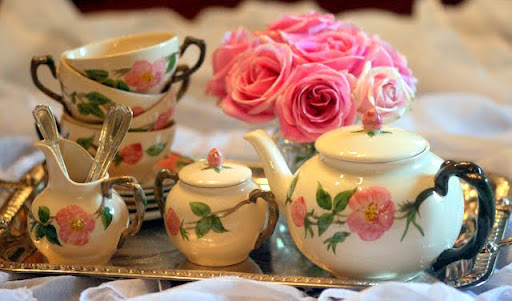 It was sold under the name Franciscan and was quite popular even during the Great Depression.  The Franciscan name alludes to the American Southwest and Franciscan monks.  The name was changed in the late 30’s to Franciscan Ware to allow for a more upscale image.  (Not sure how that changed anything, but I am sure it made sense to someone.)

In 1941, the company began producing raised-relief, hand-painted dinnerware.   Of these, only two , Desert Rose and Apple, are the only continuously produced patterns.

In 1962, Franciscan became part of a large ceramic company, International Pipe and Ceramics Corporation, known as Interpace.  In 1979, Interpace sold Franciscan to Josiah Wedgwood & Sons, LTD of England.  Wedgewood renamed the company Franciscan Ceramics.  In 1984, all the plants producing Franciscan ware in California were closed, and the production was moved “across the pond” to England.   In the year 2000, production of Franciscan ware was moved from England to “other countries”.

Now, let’s see how the look of the dishes has changed over time and location of production.  The dishes made in the USA have scalloped edges on the plate and pronounced raised relief of the flowers, leaves and branches in the photo below.

These dishes were made in California until 1984, when the Franciscan brand was sold to Wedgewood in England and the production was moved to Staffordshire, England.  Below is a plate that was made in England.  Notice that the raised relief is less pronounced and the edges are more rounded.  The paint is perhaps a little darker.  These are still nice dishes.  In this case the “Made in USA” is preferred to the “Made in England”, but typically English brands are more expensive and more collectible.  Britain has a very fine dish-making tradition, and many of my other dishes (mostly Spode) were made in England.  So I don’t mind that most of my Desert Rose dishes are British made.  A few of my Desert Rose dishes were made in the USA, and I found one that does not specify where it was made, so I am quarantining that one.

In 2000, the production of the dishes was moved overseas, and I think we all know what that means… probably China.  As mentioned in the previous post, the paint on these dishes is more harsh, I doubt that they are hand-painted any more, and there is little or no raised relief.

The USA and English made dishes have a pattern that is more raised and the paint, and painting is 100 times better than the “Made overseas” dishes.  The USA dishes are obviously the most desirable since they are the original ones, they are the oldest, and they are the most detailed, and best-looking.  As for the cost, we all know how supply and demand works; the more the demand and the less the supply, the higher the cost.  Since the USA dishes are the most in demand and the hardest to find, they are the most expensive.  On the other hand, the English dishes are also hand-painted and have raised relief, and are still very nice.  So I think they are the best deal if you are on a budget.  But if money is no object to you, then I recommend the original California-made dishes.

You can tell where the dishes are made by looking on the back. There are several different marks, and in the interest of space and not boring you, I will only show a few.  The one below is the “Made in USA” mark. It is hard to see, but look above the “253” below.

Next, is one of the “Made in England” marks.  There are several different ones, but they typically mention that they are “microwave safe” which clearly is a clue that they were not made in the 40’s.

And here is the marking that tells it all, by what it doesn’t say.  It doesn’t mention where it is made, which seems to be a popular approach now.  Notice that a lot of new dishes which used to proudly proclaim “Made in England” or “Made in Britain” in a permanent mark now simply show a removable paper label that reads “made in China”.  Clearly they are hoping that the label will fall off, or that people won’t even notice.

Now this mark clearly doesn’t mention where it is made.  As I mentioned, there was probably a paper label at one time that has come off.  Don’t let the cute little pink flower fool you into buying these.  If you see this mark, think of the robot on Lost in Space, yelling, “Danger! Danger Will Robinson!”  I know that some people are on a budget, so if that is you, consider buying second-hand dishes from eBay or a consignment store.  (This set I purchased at a consignment store did not include the teapot, so I got this one on eBay.)  You can probably find some used Bristish or American pieces for the same price you would spend on brand new dishes from China.  In fact, the trend is moving toward everything being made in China, so if you want beautiful well-made handcrafted items, second-hand is becoming the only way to buy them.  But I digress. 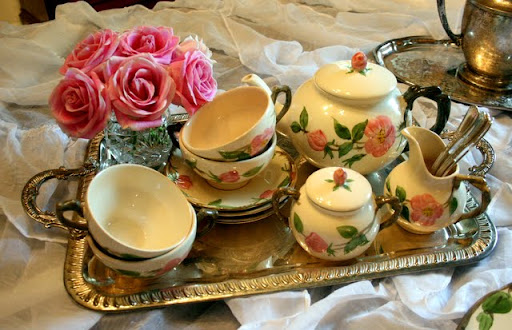 Back to my “new” Desert Rose collection, it is now unpacked and in my buffet.  I am enjoying them every day, and try to use them for a cup of tea at least once a day.  They made not be the original California dishes, but I am still happy to have the English ones.  “Cup of tea, Love?”  They are still “the Real McCoy” as far as I am concerned.

Update November 2019: I have been researching these dishes to determine if they are safe to use. I am finding very conflicting information about them, and even about how to test them for lead. Some suggest using a swab test easily available on Amazon, while other suggest that test is not appropriate for dishes. Some people are reporting that these dishes have a high lead content, even the ones made later in England. So what can you do to be safe? Well, use your best judgement for your family, and do your own research. If you are concerned, then don’t use the dishes. Using the dishes for dry food, like a cookie, is much safer than using the dishes for liquids. Also if there are cracks or crazing, then it would be safer not to use the dishes for food. Another tip is to use a glass plate on top of the dishes if you want to continue using them. Or if you feel they are not safe, then you can use them only for display.

I am not an expert, and I don’t feel that I am informed enough to make a recommendation on use, but clearly the safest choice is to not use them. Feel free to leave your thoughts in the comments.