A friend is someone who knows you and loves you any way.  And my friend Peggy is such a friend.  She had noticed that I was eyeing some Coca-Cola crates but hadn’t bought one, so recently she gave me this one as a gift.

I loved it!!  When I got it, I was thinking of using it to serve drinks on the back porch when we had guests at the ranch.  But apparently those old coke bottles were smaller than I remembered.  This coke crate has 24 small cubbies that were way too small for my glasses.  What was I going to do with it?  I then thought that maybe I could use it to display wildflowers.  So I began searching my house for some small jars that might fit in the crate.  I found some brown glass supplement bottles that fit perfectly.  For months, I had been saving these brown glass jars because they looked like old time medicine bottles and I thought I might re-purpose them one day.  How many times had I kept something that I never used, or thrown away something that I wish I had kept?  This time I got it right, yay!!  I didn’t have enough for each cubby, but I thought it would look fine.

Next, I collected my flower gathering cane, gloves, and clippers.  As I put on my boots, Molly, our collie, perked up.  She knew I was headed out the door and SHE was ready for an adventure.  She poked me with her nose, indicating that I needed to speed up the process.   She seemed to say that she was ready for whatever we might encounter, a snake, a neighbor’s cow, rabbit or a possum.  (She takes her protection job very seriously.)  I patted her head, as she continued to prod me out the door with her nose.  She headed for the woods.

“Sorry Girl,” I told her, “we’re not going to the creek, this time.  I’m just getting gathering some wildflowers.”  She seemed disappointed, but thought that maybe Mr. CH was in danger, so she ran over to the shed to check on him.

I turned back to my task at hand.  I put my gloves on, since I would be cutting thistle, which has lots of stickers.  The flowers below are such some of the flowers I gathered for the arrangement. It took a couple more trips to fill the crate.

Then I filled the bottles with water, pouring from an old vintage ironstone pitcher.

Next, I placed the flowers in the bottles, trimming the stems when necessary.  I liked using the little bottles for the flowers, since wildflowers don’t have long stems.  And I liked that the arrangement would not be tall, so it wouldn’t block the view of the person sitting across the table.

At first, I used all of the flowers that I had picked, but soon realized that the yellow and brown flowers were distracting from the purple and pink flowers.

I removed the yellow flowers, and I also tried to spread around each type of flower so that all of one type wasn’t bunched together.    Below is the finished arrangement.

We enjoyed the arrangement during lunch when I served homemade chicken salad. 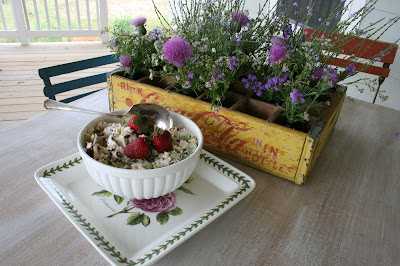 And then later we enjoyed the flowers on the not-so-formal dining room table for dinner.

I used a feedsack for the table runner.  Most feed sacks have a seam on both sides, so I just ripped out the seam, and voila, I had a table runner, that required no sewing.  This week I have been working on a new project, and that table runner has been transformed into pillows, but I’ll share that with you later!!

O taste and see that the LORD is good;How blessed is the man who takes refuge in Him! Psalm 34:8